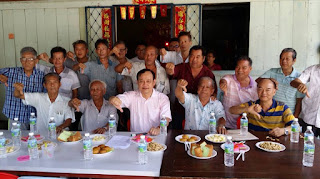 Media Conference by Dato’ Ngeh Koo Ham at Kampong Merbau New Village, Ayer Tawar, Perak at 10.30am on 7th June, 2016 (Tuesday).
Heartless Perak BN Government threatens to forfeit shops and shophouses if owners refused to pay up 75% of the value of their shop and shophouses when their leases expire. The people of Kuala Kangsar must vote for Amanah to show their displeasure against BN for its heartless policies.

Heartless Perak BN Government is demanding Tang Aa Ha @ Tang Yong Sing, age 69 to pay 75% of the value of his shophouse if not his shophouse will not longer be his anymore.
Tang Aa Ha @ Tang Yong Sing inherited his shophouse from his father and his family has owned his shophouse for more than 60 years when its leasehold title expired recently. His shophouse has ceased business many years ago like many shops in small new village with the advent of modern shopping centres. He is now required to pay RM48,750-00 i.e 75% of the value of his shophouse for his title lease to be extended. Will Mr Tang Aa Ha @ Tan Yong Sing a retired poor farmer lose his family shophouse soon?
In 2008, the Pakatan Rakyat government had made a decision to give a discount of 80% on the premium rates payable under the BN government for all shops, shophouses and houses in Planned Villages (Kampung Tersusun) and Chinese New Villages when their leases are renewed. The same was implemented but unfortunately when BN grabbed power in Perak on 6/2/2009, it reversed Pakatan Rakyat’s people centred policy.
The Pakatan Rakyat Government was to extend its 80% premium discount policy for all properties due for renewal of leases in Perak under its ‘Enrich and Empower the People’ policy. The people can renew their leases any time up to 99 years which will ensure that their properties will always be of high value with the payment of a small premium payment.
The BN Perak Government must differentiate between new alienation of land and those whose property leases are expiring.
With BN’s current policy, the properties which leases are expiring will be of no value. They cannot be sold for value neither can the owners take loans from financial institutions to rebuild their buildings.
I call on the BN Perak Government to give 80% discount on the premium payable as was practiced by the PR Perak Government.
The people of Kuala Kangsar must show their displeasure by voting the Amanah candidate in the on going by-election.
DOWN WITH HEARTLESS BN GOVERNMENT!
NGEH KOO HAM
Sitiawan State Assemblyman &
Member of Parliament for Beruas
拿督倪可汉于2016年6月7日（星期二）上午十时三十分在霹雳爱大华甘榜马坡新村召开记者会发表的文告。
如果业主拒绝在租赁到期时支付高达75％商店和店屋的价值，无情的霹雳州国阵政府威胁要没收商店和店屋。江沙人民必须投票诚信党以示他们对国阵无情政策的不满。