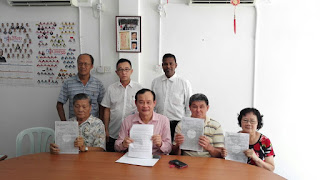 BN Perak Government must come clean on its policy with regard to the premium payable for renewal of leases for Planned Villages (Kampong Tersusun) and Chinese New Villages.

Perak Pakatan Rakyat Government in 2008 had a policy of emphasising good governance and collecting minimum tax from the people of Perak.

Pursuant to the said policy, the Perak PR Government implemented a policy giving 80% discount of land premium payable for the renewal of all titles in Planned Villages (Kampong Tersusun) and Chinese New Villages. Apart from the 80% discount of land premium, the Perak PR government also approved freehold titles for those in Planned Villages and Chinese New Villages. It was the policy of Perak PR Government to enrich and empower its people. A freehold title will increase the value of the properties in Planned Villages and Chinese New Villages. The residents in turn are able to use their land titles to obtain loans from financial institutions to rebuild their houses and shophouses, many of which were in dilapidated conditions.

After the power grab by the BN on 6/2/2009, they proclaimed that they will continue with the 80% premium discount policy but will only approve leases up to a maximum period of  99 years.

However, over time the Perak BN government has gone back on its promise. It excluded shophouses in the Chinese New Villages from any premium discount. New Villagers with shophouses have to pay tens of thousands of ringgit in premium.

Recently, it has started to exclude the spouse or children of the registered owners from any discount thereby causing them to pay many times more the premium that needs to be paid. One of such cases is the case of Too Oong Ching. He was asked to pay RM25,500-00  for the renewal of a housing plot in Kampong Raja Hitam new village.

I believe many have become victims of the deceptive change of policy of the Perak BN State Government and call upon them to ask for refund from the Perak BN Government if they have paid their premiums in full.

The PR Perak Government gave huge premium discounts to the people because we wanted to lighten the loan on the people of Perak. We were able to do so due to our efficient and non-tolerance of corruption in our government.

Hello Everybody,
My name is Mrs Sharon Sim. I live in Singapore and i am a happy woman today? and i told my self that any lender that rescue my family from our poor situation, i will refer any person that is looking for loan to him, he gave me happiness to me and my family, i was in need of a loan of S$250,000.00 to start my life all over as i am a single mother with 3 kids I met this honest and GOD fearing man loan lender that help me with a loan of S$250,000.00 SG. Dollar, he is a GOD fearing man, if you are in need of loan and you will pay back the loan please contact him tell him that is Mrs Sharon, that refer you to him. contact Dr Purva Pius,via email:(urgentloan22@gmail.com) Thank you.