The Team serving the rakyat

A new member has joined Dato’ Ngeh Koo Ham's existing public service team which serves the Sitiawan State constituency and Beruas Parliamentary constituency. She is Ms Lin Hui (012-5233730) (to the right of Dato’ Ngeh in the picture).

Mr Paul Yong, Political secretary (012-5184733) will be the overall coordinator for both constituencies. He will represent Dato’ Ngeh at dinner functions and all press conferences and also attend to all problems faced by the people in both constituencies.

The other volunteer team members are as follows: 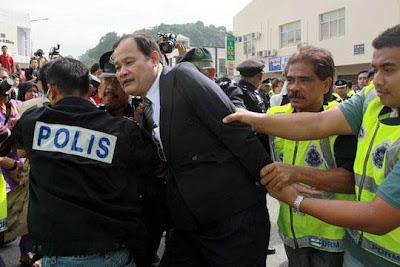 The people of Perak did not celebrate Malaysia Independence day yesterday (31st August 2009) because they have been colonized again. We must regain our independence and the first step is to boycott the BN colonist.

In Perak though a State within the Federation of Malaysia, there was hardly any celebration of Malaysia Independence Day yesterday (31st August) and the days preceding it. This is understandable as the people of Perak had been colonized again i.e the imposition of the will of a group of people over the will of the general populace. This domination was enforced by force literally through the barrel of the gun. The BN party and the its leaders who have been rejected by the people of Perak used the police to enforce their dominance.

On 3 March 2009, we saw the police preventing Perak State elected representative from entering the State Assembly to attend a meeting convened by the lawful Speaker, YB V. Sivakumar.

On 7 May 2009, we saw the police invading the State Assembly and forcibly removing the lawful Speaker and imprisoning him in a room.

On many other occasions we have also seen police preventing the lawful Speaker and his Privileges Committee members from operating or using the State Assembly facilities.

Police have also been used to arrest hundreds of people who protested against BN for trampling upon the democratic rights of the people of Perak. Many were arrested for wearing black shirts, holding candle light vigils, drinking black coffee and holding protest fasts.

BN the colonial master of Perak is running Perak like a police state.

The BN colonial master tried to create a semblance of Independence Day celebration by putting up flags at government buildings but people of Perak were in fact mourning the death of democracy in Perak.

According to surveys conducted by NTV 7, Merdeka Centre and others, about 90% of the people of Perak (supporters from both BN and PR) wants the State Legislative Assembly dissolved to pave way for a fresh election to resolve the present constitutional crisis. The will of the people must be respected.